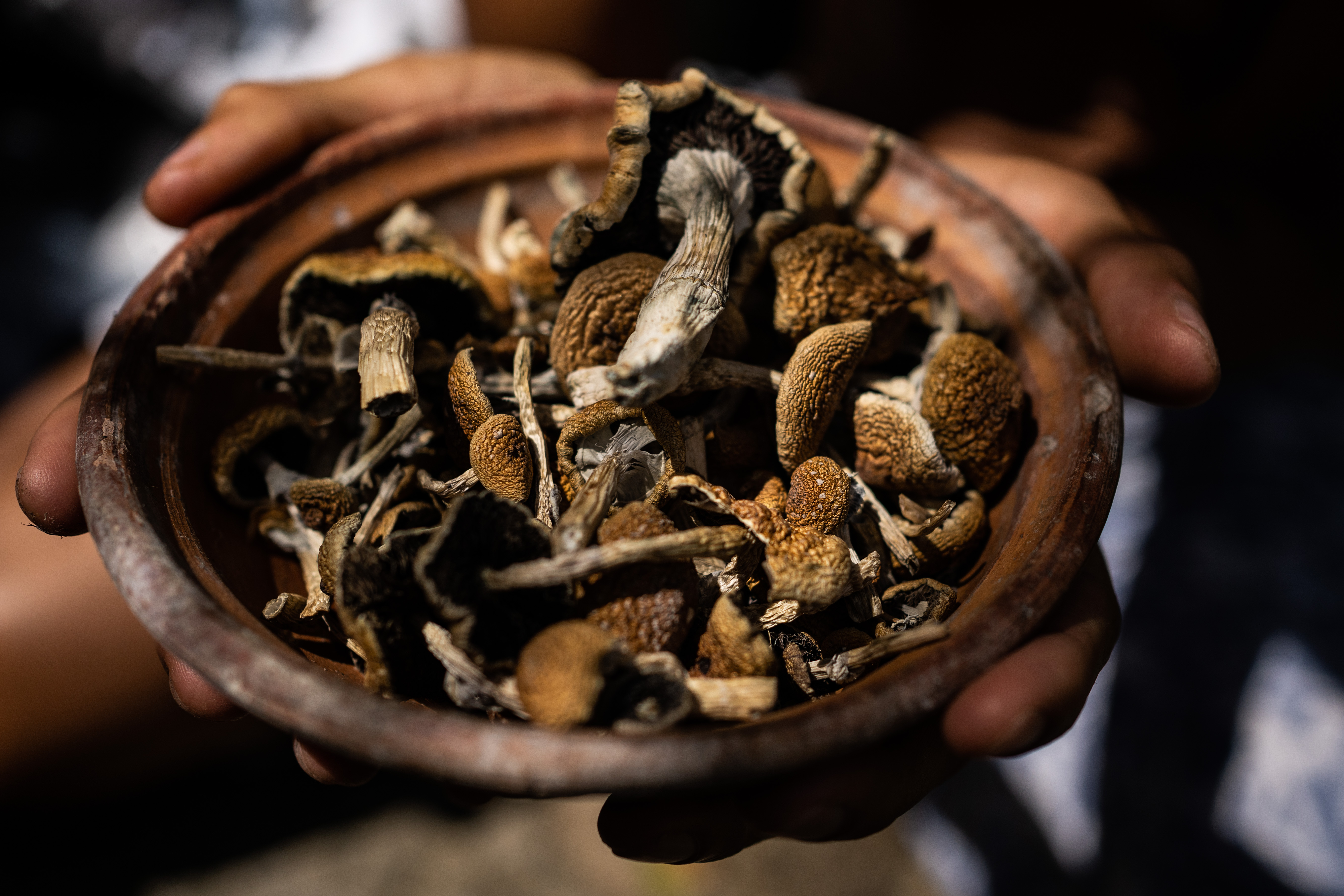 This guide is for educational, research, and harm reduction purposes only.

If you do decide to engage in illegal activities (which we do not condone), please be careful, safe, and discreet.

You are responsible for your actions.

Currently, the only countries in which people may legally possess, cultivate, or consume psilocybin in some form are Jamaica, the Netherlands, Brazil, Samoa, British Virgin Islands, Austria, and a few jurisdictions in the United States. You can learn more about the legal status of magic mushrooms in different countries here.

For many, the safest way to access psilocybin is through a clinical trial. You can search through this list of trials. Some of these studies have overwhelming interest from potential participants and/or stringent selection criteria so there is no guarantee you will be able to join. If you are admitted into a study, you may receive a placebo instead of psilocybin.

In any case, there are a large number of licensed professionals who are willing to support you in your preparation and integration processes. It may be worth reaching out to one or more of them to explore your options.

are good places to start your research.

Networking and asking are the most traditional ways of finding medicine. As psychedelics gain more mainstream acceptance, you may find that some people are open to discussing the topic. Sometimes, asking a question like "hey, have you ever tried microdosing?" or "have you heard of microdosing?" can open up doors. Of course, it's best to get to know someone before starting this type of conversation. Open-mindedness, open-heartedness, brightness, and kindness are some of the traits to look for in conversation partner. Please be mindful of your setting when asking. Avoid starting these conversations in jurisdictions where these medicines are illegal and stigmatized.

Magic Truffles in the Netherlands

In the Netherlands, magic truffles, the underground part of some magic mushrooms, are legal and openly sold in physical and online “smartshops.” Unfortunately, magic mushrooms were banned in 2008 after a young girl died after jumping from a bridge while under the influence of multiple substances (including alcohol). Luckily, magic truffles were excluded from the list of prohibited substances and continue to grow in popularity. Through another legal loophole, several companies also continue to produce and distribute magic mushroom grow kits, which are legal because the kits themselves do not contain psilocybin.

Listed below are just a few examples of physical smartshops. Amsterdam has the highest concentration of these businesses, but in most major Dutch cities, you’ll be able to find a store that sells truffles. Some of these smartshops also sell products through their websites.

There are also several online-only smart shops based in the Netherlands that sell truffles and grow kits (sometimes alongside other products). Some only ship within the Netherlands while others ship overseas (unlawfully in many cases). Here are just a few examples:

In Canada, while psilocybin is illegal on the national level, there is a fast-growing number of online dispensaries that offer magic mushrooms. The Medicinal Mushroom Dispensary, started by Dana Larsen, a veteran Canadian cannabis advocate, was one of the first Canadian online shops. Larsen’s plans to also open a Vancouver storefront was given a boost when a motion to halt his plans was defeated six to two by the city council in September 2019. The city seems to encourage expanding access to the medicine, and to turn a blind eye to Larsen’s activities. Here are some more examples of Canadian online mushroom shops:

Many online originally-cannabis-only dispensaries are now expanding their product lines to include psilocybin mushrooms. Most of these web shops only ship within Canada, although there are a few that ship overseas. For a more complete view of the Canadian market, visit Psillow.

In Jamaica, psilocybin mushrooms are completely legal. If you are in the country doing research, you may want to ask around for Tedd’s or Miss Brown’s. As in the Netherlands, there are also several established retreats that may be able to help with your requests. You can explore your options through a search engine or through the Tripsitters Directory, retreat.guru, or psychedelic experience.

(Please note that in 2006, Time magazine named Jamaica “the most homophopic place on Earth,” and if you identify as LGBTIQ, you may want to conduct research in other places.)

In Brazil, even though psilocybin and psilocin (another psychoactive compound in magic mushrooms) are technically illegal, it is still legal to possess, consume, and sell magic mushrooms. They are sold mainly through websites like jardim xamanico.

In the British Virgin Islands (in the Caribbean to the east of Puerto Rico), magic mushrooms grow naturally and are legal to possess and to consume. Although it remains illegal to sell or market the fungi, these laws remain unenforced. The Tortola island in particular is known for the many small businesses that openly sell magic mushrooms.

Here are a few other options, some of them safer than others. In Portugal, all substances have been decriminalized for personal use and possession since 2001. In Spain, personal use of psilocybin in a private space is decriminalized and plant medicine thrives in some parts of the country (e.g. Ibiza and Mallorca).

In Mexico, mushrooms are allowed if they are used as part of a religious ceremony, and there are several organizations offering mushroom retreats. Specifically, in Oaxaca, Mexico, home to the late Maria Sabina (the famous mushroom curandera), you will find many people offering mushrooms and ceremonies.

In certain parts of Thailand (e.g. Pai, Phuket, Koh Pha Ngan), mushrooms are widely available although they are technically illegal. Psilocybin mushrooms are also openly sold on Gili Air, Indonesia, an island right next to Bali, but this option may not be advised as the consequences of being caught with illegal substances in Indonesia are severe. In Laos, some restaurants offer a special menu of magic shakes, teas, and pizza. As always, please take extreme caution and conduct extensive research as you explore these options to remain safe and free. We do not recommend breaking any laws.

Soon after Denver’s announcement, the cities of Oakland and Santa Cruz in California voted to decriminalize all entheogens, including psilocybin. Since then, Ann Arbor, Michigan, and Washington DC have passed laws decriminalizing most psychedelic substances. In November 2020, Oregon voted yes on an initiative that legalizes psilocybin therapy (this initiative is currently in a two-year development phase). Numerous other states and cities are currently considering measures to decriminalize or legalize mushrooms and other psychedelics.

Soul Cybin seems to be taking the plunge and shipping within the US from Ann Arbor. Arbor Shrooms and Psilocin Dispensary may be options as well.

To learn more about the efforts in the US, visit Decriminalize Nature or Psychedelic Support's article "Are Psychedelics Legal Now? Initiatives for Legalization and Decriminalization".

If you live in a jurisdiction where cultivation of mushrooms is legal, you may want to consider growing your own medicine. Shroomery, /r/shrooms, /r/unclebens and youtube are sources for education inspiration, and community. Here is a particularly useful list of youtube growing guides. DoubleBlind magazine offers a mushroom growing course.

‍Here is a comprehensive list of resources for different methods to grow your own.

In New Mexico, growing psilocybin mushrooms is legal, but not drying or preserving them. In the United States, spore syringes are legal except in Georgia, Idaho, and California. There are many spore vendors like

You can also buy grow kits and various other growing supplies from websites like Midwest Grow Kits and Mush Box.

Lastly, you may want to pick your own magic mushrooms if you live in a jurisdiction where this is legal. This list gives an idea of what mushrooms grow naturally in your area and here is an overview on how to find magic mushrooms. Both of these guides have been written by Alan Rockefeller, a renowned mycologist.

May this guide help you get connected with psilocybin mushrooms in a legal and safe way. Magic happens when you reach out.

Wishing you all safe and healing journeys.

Read other guides for journeyers.

Connect with the mycelial network through the Tripsitters Directory.

Explore the Psilocybin 101 Course or request a Consultation.